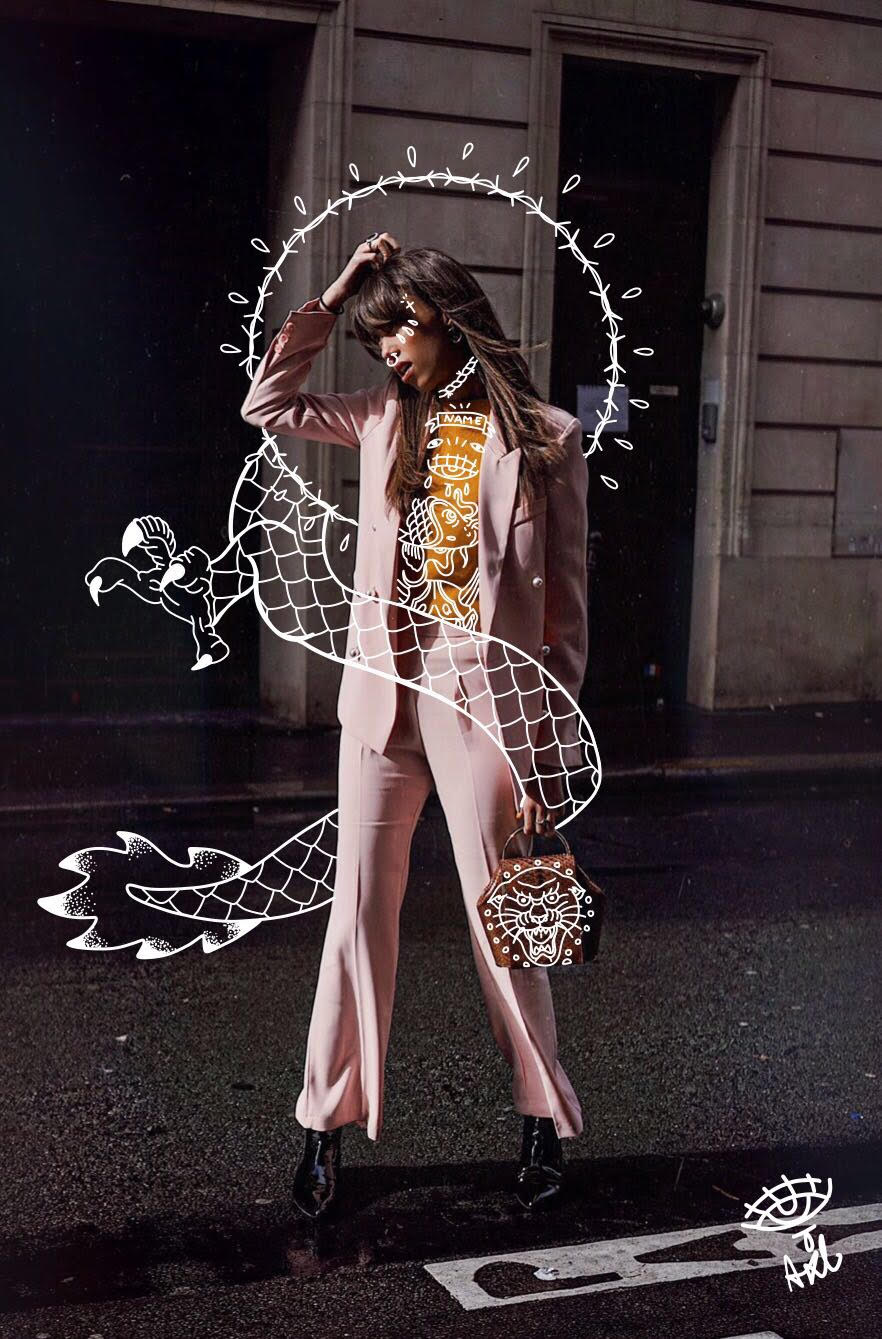 Our team stumbled upon Alex Sobron’s art back in January and fell in love with his work. This guy has talent. After running into him last week at the Drome show during Paris fashion week, we decided to interview the beautiful mind behind the work. We are thoroughly all obsessed! Here is a bit about Alex.

Alex Sobron (b. 2000) is a young contemporary artist born in Palma de Mallorca Spain who works mostly with illustration, photography, sculptured together with the restoration and integration of antique found objects.

His work, filled with symbols and icons he’s been collecting from a range of cultures create a unique visual language, which stands out the repetition of the eye, skulls, and crosses.  His goal is not only to deliver an ethnic feeling, but rather to create a juxtaposition between traditional symbols and contemporary themes.

Through his work, he critiques society and current events, but always with a touch of irony filtered through the point of view of a sixteen-year-old young man.

Despite his age and experience, Alex has completed two individual exhibitions and two collective shows in different galleries.

A few Questions with Alex Sobron

Where do you live?

I’m French, but I was born and raised in Mallorca, Spain.

What are your top three inspirations for art?

My three main inspirations are Asian culture, but specifically, Indian culture which I’ve been attracted to since I was very young. Tattoo art as I borrow a copious amount of symbols from it. Watching the news and analyzing what is going on around the world also inspires me. What are your favorite albums to listen to while you’re creating?

I listen to a variety of music while I work. It depends on the mood that I want to create for each piece. I can listen to from Buddhist mantras to the latest hits. My favorite albums are Arctic Monkeys, Whatever people say I am, that’s what I’m not, The Score by The Fugees, Lazaretto by Jack White and Royal blood by Royal blood.

When you were a kid, what was the most impactful experience you can remember that made you want to create these beautiful images?

Being raised in a family with a creative energy was obviously something that forced me to want to express myself in an artistic way. I can’t think about a particular experience that made me want to create; I just grew up with the idea of considering art a fundamental part of my life.

What did you learn and love about Paris Fashion Week?

Fashion week was an amazing experience, the street vibes were incredible. I not only got to see amazing looks, but I also got to know lots of interesting people. I was able to freely express myself and dress up as I wanted to without being judged. It also gave me great ideas for my upcoming exhibition. I felt that I want to live surrounded by fashion and art in the future. What are your goals for the future?

In the future, I would like to develop in any creative discipline. I’m focusing more on the fine arts. I’m also very interested in photography, fashion, street art or tattoo. I will like to create a personal style and get recognition for it.

Do you work with any charities that are close to your heart?

Not now, but in the future that is something that I’d love to do.

If you could interview any famous artist from a particular period who would it be and why?

I would have loved to talk with Ren Hang, a Chinese photographer who passed away three weeks ago, to get to know more about his personal life and the motivation behind his career. His work is very inspiring, powerful, and that he used something as visually shocking as nudity or even pornography in a country with such a strict censorship policy as China is something that I admire. What are the best ice cream and food spots you love all over Europe?

My favorite food places are Chez Camille, which is a little restaurant in Le Marais, Paris, specialized in traditional French food. Punjab, a fantastic Indian restaurant in Covent Garden, London and Paper Moon, an Italian restaurant in the heart of Milan.

Who are you favorite fashion designers?

My favorite fashion designers are Marianna Rosati, who is the head designer at DROMe, Gildas Loaëc and Masaya Kuroki, head designers of Madison Kitsuné and Alessandro Michele, who presented a fascinating collection for Gucci’s FW 17-18. Which art deco period would you like to time warp?

I will love to go back to the renaissance period to meet geniuses such as Da Vinci or Michelangelo. I’d like to see how the population dealt with all the cultural changes that took place in that specific time. I will also like to go to the 60’s to live in the same period as artists such as Warhol, Joseph Kosuth or Dan Flavin.

When did you first realize you wanted the artist life, and when did you have your first art exhibition?

I’ve always lived with the idea of relating my professional life with anything creative throughout all my life, but it wasn’t till 2010 at the age of 10, when I did my first solo show that I realized that I wanted to make art as a living.

Who inspired you to do art?

If I had to choose someone, it would be my grandfather. He was a fashion designer, an artist, and when I was a little kid, he would take me to his studio. We spent hour painting and creating cool pieces.

Do you have a muse?

I am my muse. I work a lot with self-portraiture or with different representations of my image. Not only because there is a lot of elements from my personal life in my job, but also because I think one should get inspiration from oneself instead of looking for it in other people or things.

Dragons. I’m born in the year of the Dragon in the Chinese horoscope.