© 2020 Catcher in the Style - all rights reserved.
A blog occupied by Fashion, Art, Music, Travel, Sustainability and Culture.
Search 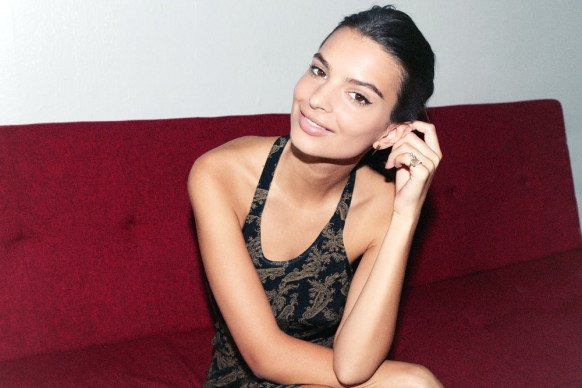 Emily Ratajkowski hands down is one of our favorite models. I had the pleasure of meeting her with some of our mutual friends a few months back. She’s a total sweetheart and obviously a bad ass.  For this weeks makeup tip Monday, we are reposting an awesome interview she did for www.Intothegloss.com.

“I’ve been modeling for a long time, but only full-time for the last two years. And my career’s definitely changed… What’s funny is initially my agency turned down [Robin Thicke’s] ‘Blurred Lines’ music video. We said, ‘There’s no way dancing in a music video nude is going to be cool.’ But the director, Diane Martel, wanted to meet with me, and after we talked, I was totally on board. She told me that she would make it fun and interesting, and how making eye contact with the camera would change everything. If you look at art history, nudes making eye contact with the viewer completely defeat the power of the male gaze. It’s crucial. Our attitude in the video was a little silly—we’re rolling our eyes, ignoring the men, and making fun of them… It’s also supposed to be about celebrating your own body and about confidence. It was a fun video, and in general, I have always felt great about nudity.

I was born in London, but I grew up in San Diego, and now live in New York. Growing up, my family spent every summer in Mallorca and Ireland and my mom, who is an English professor and a hippie, was always topless at the beach. And when I was little, I was always naked on the beach and around the house. I never felt there was this sexuality that was immediately tied to nudity. I thought, ‘This is a body and it’s beautiful.’ Yes, of course a naked body is sexy, but it’s nothing to be ashamed of. I developed early, and it was awkward because people would say weird things, but my mom taught me to never apologize. She always said, ‘Just love yourself. That’s all that’s important.’ I don’t think there has to be anything dirty or gross or objectifying about nudity. It’s not so black and white.

My mom is one of those people who always had 12,000 beauty products, but only used three of them. When I was a kid, I would always be like, ‘Why do we have this in the house? What is this 20-year-old stuff?’ As I got older I realized that you can just have five things that you love and a simple routine that you stand by. Then, you don’t ever have to think about it. Everything that I have, I use on a daily basis.

I don’t even use face wash—I clean my face with water. Then, I use a little bit of drugstore moisturizer, like Neutrogena, to take off my makeup. I put it on and rub off eye makeup with a tissue; it’s the fastest, easiest makeup remover. My main thing is Philosophy’s Hope in a Jar moisturizer. It’s so nice and thick. When I want my skin to look really dewy, I’ll put Aquaphor under my eyes at night. It just makes my skin feel firmer and moist. It’s especially good when I’m traveling, to keep my skin from drying out and over-producing oil.

For makeup, after my face is moisturized, I mix a little Hope in a Jar with Neutrogena Healthy Skin Liquid Makeup, Broad Spectrum SPF 20 in Natural Beige. It’s amazing! It’s so light and you don’t need anything to apply it with, or to wear anything else. If I need any spot coverage, I use Make Up For Ever 5 Camouflage Cream Palette. I found it one time that I had a huge casting, and I had a bad breakout. The night before, I did terrible things to my face, and I woke up and emailed my agent and said ‘I cannot go to the casting.’ It was an important meeting. She said, ‘You’re crazy. They already know what you look like. It doesn’t matter if you have a zit.’ But I thought it was terrible, so I went to Sephora for help and they gave me that palette. It saved my life. [Laughs] I have a brush to apply it with, but it’s easier to blend with my finger. I can use it under my eyes, too.

I have a serious thing about brows. If I don’t put on any makeup, I at least need to brush my eyebrows with Maybelline Great Lash Clear Mascara. Once they’re standing up straight, I feel pretty. I used to use a Chanel product, but you don’t need the Chanel, it’s the same thing. I fill them in with Maybelline Expert Eyes Twin Brow and Eye Pencil in Medium Brown.

On my cheeks and lips I wear a berry lipstick—Make Up For Ever Rouge Artist Natural in #9. It’s super nice because you can put on a tiny, tiny little bit, and, for cheeks, it works better than powder blush. My lips are pale. When I get on set, people always ask me what I have on them because they’re so light. So, this lipstick gives my lips some dimension. It’s funny because in ‘Blurred Lines’ everyone loved that I had red lips, but people are sometimes scared to use color on me because my lips are so full. I like wearing something darker, though. At night, I put the berry lipstick on thicker, or I use MAC Russian Red. That’s my fancy makeup—either a red lip, or a cat eye.

For me, a cat eye looks really exciting. I use Revlon’s ColorStay Liquid Eye Pen because it has a nice felt-tip point—it’s just so much easier than drawing it on with a brush. I don’t even own eye shadow. For mascara, Clinique High Impact Mascara is nice because it doesn’t go on really thick, it just volumizes and looks relatively natural.

In terms of hair, mine is very fine, but I have a lot of it. I hate washing it, so I only do it every three to four days with Bumble & bumble Gentle Shampoo and Mending Conditioner. In between, Alterna Caviar Anti-Aging Dry Shampoo is my savior. I was using baby powder before, because that’s what they use on set. I don’t really like the dry shampoo sprays, because they don’t last. Powders make my hair get fuller and you don’t have to do the blow dry/wash thing too often. I think it just fucks with your hair too much.

I don’t wear perfume. I used to wear DKNY but once I ran out, I kind of just stopped. I really love the scent of my body wash—Bliss Soap n’ Scrub. It smells amazing, like you’re getting super clean. Two in one! After that I moisturize my body with Bliss Body Butter.

When it comes to clothes, I’m kind of a minimalist. I have a full cup, so clothes hang differently. The avant-garde stuff that looks great on flat chested girls doesn’t always work for me. But I want to be a model that breaks down the traditional body boundaries. You don’t have to be 5’9” and an A-cup to be a successful model, and that’s nice.”

—as told to ITG

Previous
Next
Share this
© 2020 Catcher in the Style - all rights reserved.